With jobs in healthcare, manufacturing, education and more, there are many reasons St. Cloud is a GREATER place to work and live.

Almost 70 percent of the city’s population is under 44 years old. The age cohort with the largest share of the population is 20-24 years. This means the St. Cloud area workforce is full of young professionals with big ideas.

The St. Cloud metro has the state’s fastest growing labor force. Currently, the labor force is at 111,086 people, with continued expansion year after year. There are jobs in nearly every industry: from management and business to architecture and engineering, social services, law, healthcare, service, construction, and many other areas.

The St. Cloud area is also home to several award-winning colleges and universities, including St. Cloud State University and St. Cloud Technical and Community college, which not only provide great places to work but also make for an educated workforce.

Roughly 67 percent of the St. Cloud metro area population has some college education, with 24 percent attaining a bachelor’s degree or higher. This makes St. Cloud an ideal area for budding entrepreneurs. In 2016, St. Cloud was named a “Best City for Young Entrepreneurs” by NerdWallet.com.

That ranking was based on Small Business Administration loans per 100,000 residents, small businesses per 100 residents, percent of total population age 25-34, percent of population with a bachelor’s degree or higher, median earnings, and unemployment rate.

St. Cloud has 2.55 small businesses per 100 residents, reflecting the fact that it’s the perfect environment for young entrepreneurs.


The St. Cloud workforce is skilled, educated and growing. Just another reason St. Cloud is part of something GREATER. 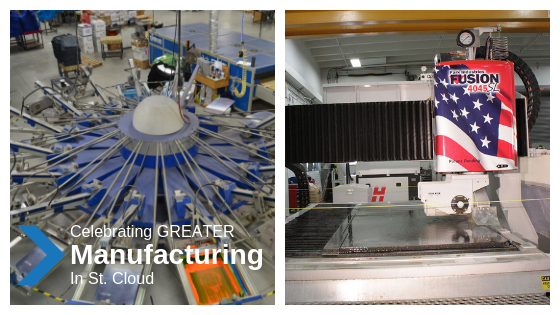 Manufacturing is St. Cloud’s second sector of strength with 15.2% of all employment in the area.

Many St. Cloud businesses are featured in the Made in Minnesota Directory, which is an online database of Minnesota manufacturers and suppliers. Materials, components and finished products can be bought from each other instead of out-of-state or foreign suppliers.

St. Cloud has a diverse mix of leading local, regional, and national manufacturing companies. Our area was even named a “Top Leading Location” by AreaDevelopment.com based on our diverse economy and how well St. Cloud is poised to capitalize on economic growth. 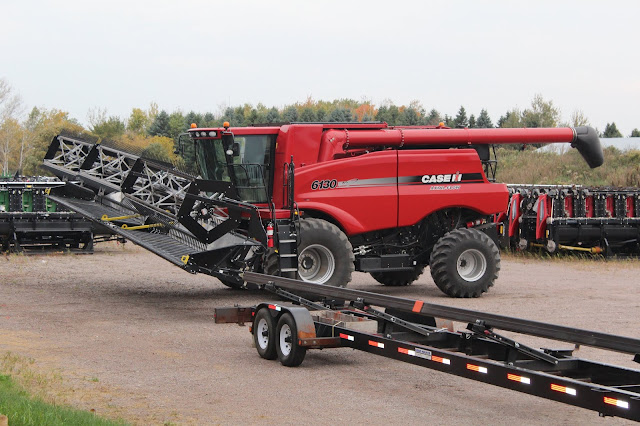 St. Cloud also has two modern business parks with 300+ acres of vacant land available for one-third the cost of comparable property in the Twin Cities: the I-94 Business Park and the Airport Business Park. For more information and statistics on the St. Cloud area’s manufacturing, watch this video.

The Minnesota Statewide Tour of Manufacturing is going on throughout the month of October, and MN Manufacturing Week took place October 1st-7th. In the St. Cloud area, we are continually celebrating manufacturing - one of our community’s biggest assets!

Our manufacturing skills are just one more reason that St. Cloud is a part of something GREATER!

6 GREATER Locations for the 2018 Photo Contest 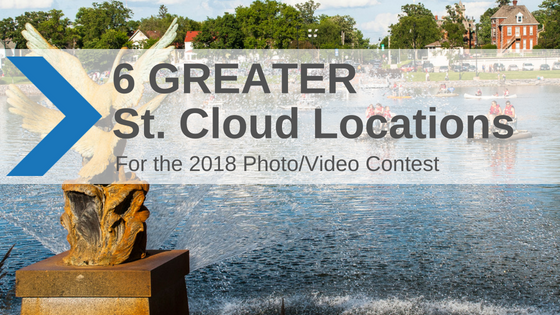 The 2018 St. Cloud GREATER Photo/Video Contest is on! Submit photos and/or videos that show us what you think makes St. Cloud a great place to live, work, and play.

There are several categories for types of subjects and submissions, so feel free to let your camera and our city be your guide. You may win $250 in cash!

If you’re looking for places to shoot your photos, here are some of the top spots in St. Cloud to find inspiration, picturesque scenery, and moving moments of St. Cloud residents at work and play.

The Minnesota Veterans’ Plaza is a touching tribute, dedicated to those who have served to protect the United States of America.

From the blooming flowers to the winding paths and brick walkways, these gardens are full of picturesque views of nature. Get up close and zoom in on plant and animal life or zoom out to capture the views in the twilight or morning light; it’s a great place for scenic shots. 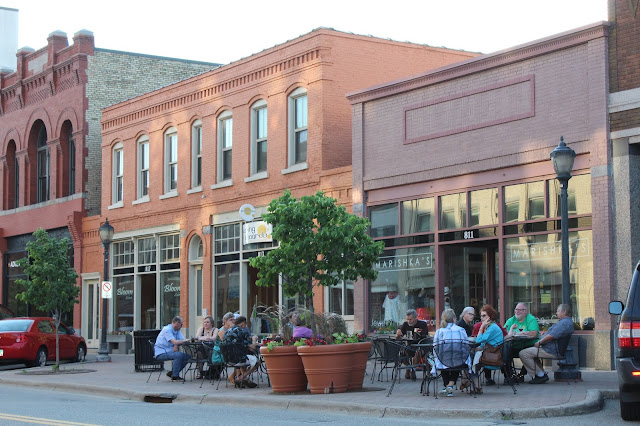 When it comes to dining, the St. Cloud area is full of yummy platefuls and quaint locations. Try any of these local restaurants, or more that aren’t on this list, and capture the offerings that one can find in St. Cloud.

For the Business or Community Life categories of the photo contest, try looking downtown! With an ever-changing downtown area and plenty of people on the move, capture the spirit of our city here.


Submissions for our photo and video contest are due by 4:30 pm on July 27, 2018. Please note that any entries featuring people with identifiable faces must submit a completed Authorization of Use of Photo/Video form with entry. Failure to do so will disqualify your entry. Click here to open a blank form. Please click here to see the full rules and list of categories, or to submit an entry.

More Awards that Prove St. Cloud is Something GREATER!

We don’t usually toot our own horn, but St. Cloud just keeps racking up the awards and top rankings!

We have recently received recognition for even more ways that make St. Cloud a great place to live and work. But don’t just take our word for it…

One of the Best Performing Small Cities - 2017

Milken Institute named St. Cloud a “2017 Best Performing Small City” (#57 of 201 U.S. small cities), based on metrics associated with job creation, wage gains, and technology developments. These rankings take a look at how underlying factors and unique characteristics of a metro area lead to economic growth and prosperity.

One of America’s Best Hockey Towns

SmartAsset.com named St. Cloud an “America’s Best Hockey Town in 2018” (#14 of 114 U.S. cities). We all knew this to be true, and now the rest of Hockey Nation knows it too! This ranking was based on factors like fan intensity, “hockey” related online searches, and quality of life overall – not to mention that St. Cloud’s Lake George hosted Hockey Day Minnesota in January of 2018! So let’s keep playing and cheering on our great hockey teams!

Saint Cloud has been recognized as the Greenest City in Minnesota by Insurify, an award that recognizes our city’s contributions to minimizing our carbon footprint, specifically in responsible car ownership and driving habits. Insurify looked at metrics such as average fuel efficiency, engine type, annual miles driven, and cars per household. Congrats St. Cloud residents!


St. Cloud has also received these awards worth crowing about:

Check out this video on our YouTube page to learn more about our awards and recognitions:

The City of St. Cloud has seen many changes over the last several years, but as the population continues to grow, it remains the kind and welcoming community it has been for decades.

The City has built a wider variety of cultural centers, restaurants, and so much more to accommodate new people from all walks of life. We cultivate a GREATER sense of community.

The feeling of community in St. Cloud is fostered primarily by the events and activities that bring people together. Whether it’s music, theater, art, sports, or recreation, you’ll find exactly what your looking for. visit aroundthecould.org for more.

Riverside Park is a hot spot year-round! During the winter months, you’ll find families sledding and playing in the snow or skating on neighborhood rinks. During the warmer months, you’ll see people playing frisbee golf, walking, having picnics, and generally enjoying the outdoors.

Downtown St. Cloud offers a thriving art, music, and theater scene. It hosts spring, summer, and fall art crawls every year – which are not to be missed! Also in the summer, you can take part in one of St. Cloud’s largest and most popular activities; Summertime by George. This is a free summer concert series accompanied by countless local food, drink, and art vendors and takes place each Wednesday night June through August at Lake George.

St. Cloud offers all of these activities and so much more for all age groups and interests.


GREATER living is simple in the St. Cloud community. Our calendar is full of activities, artists exhibitions, shows, and educational events. The affordability of the area makes this city-with-a-small-town-feel a fantastic place to live.

St. Cloud is a GREAT place to call home. Not only are there ample work opportunities and an affordable cost of living, but when it comes to play, there are hundreds of options right outside your door.

Downtown St. Cloud features more than 60 retail shops – many of which are locally owned businesses. Whether you’re looking for a trendy local shop to browse unique children’s wear, a trusted place to find outdoor sports equipment, a relaxing atmosphere to unwind and get a GREAT new do, or even a generations-old local business that can help you build or remodel your home, you can find all this and more in Downtown St. Cloud. And did we mention the antique stores, game shops, and art galleries? There are tons of options! For a complete list, click here.

Not only does Downtown St. Cloud offer a wide array of shops, but it also boasts a huge variety of eating establishments – more than 55, just to give you an idea. Whether you’re in the mood for some Irish fare, something sweet, classic pizza, delicious Indian food, or simply burgers and beers,  you’ll find it all Downtown. For a full list of Downtown dining options, click here.

No matter what your interests, you’ll find something to love about St. Cloud, which is just one of many reasons that we think it’s a GREATER place to live!

The City of St. Cloud boasts eclectic and advanced education options for anyone looking to learn. From private and charter schools to homeschooling and one of the largest public districts in the state, there are plenty of options! 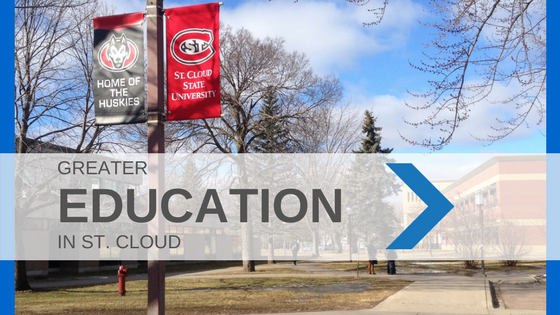 St. Cloud is home to Minnesota's second-largest public university with around 15,000 students enrolled each year. According to the City of St. Cloud's website, “SCSU is ranked as an 'American's Top College' by Forbes magazine based on student satisfaction, post-graduate success, student debt, graduation rate and academic success and ranked as a 'Money's Best College' by Money magazine based on quality of education, affordability and outcomes.”

The St. Cloud metropolitan area serves 35,000 students at many different schools. Our St. Cloud Technical and Community College educates many students looking for local careers in advanced manufacturing, applied engineering, and health services. In 2016, SCTCC was ranked #13 in the top 50 Best Value Community Colleges. This ranking is based off graduation and transfer rates, cost of attendance, and mid-level salaries among graduates.

A unique opportunity given to elementary students in school district 742 are the Chinese/Spanish immersion programs. One of the great opportunities high school students are offered at Cathedral, a private Catholic high school located downtown, is the chance to serve in Africa. Students can opt to take a two-week mission trip and volunteer their time and talents to help 3rd world countries in Africa.

Another opportunity for unique education in the St. Cloud area is the plethora of post secondary enrollment options (PSEO) classes offered at local high schools. Both Tech and Apollo high school allow upperclassmen to heavily enroll in PSEO college courses at SCSU to earn college credits and advance learning.

For those who take education into their own hands, our Great River Regional Library has been recently remodeled and offers numerous branches throughout the metropolitan area. Many homeschooling groups meet and resource the library as well as countless high school and college kids. Another helpful resource we have for education is the Stearns County History Museum. The accredited museums provides guided tours and has an extensive research department as well as online archives.

These touch on just a few of the schools, opportunities, and resources St. Cloud has that make it a GREATER place to learn.
at 8:00 AM No comments: